We’re becoming increasingly urban. Now predominantly city dwellers, instead of rural beings, we’re integrating our “Human Nature” with an “Urban Nature”. The ways that this monumental shift in lifestyle is expressed in the city environment was one of the main themes to emerge from the recent trendtalk hosted by Plascon and Inhouse Brand Architects. The 7th trendtalk in the series, the event took place on 14 November at the Plascon Auditorium in Cape Town. Speakers Laurence Brick of Loads of Living and 100% Design SA; communications consultant and design champion Lianne Burton; and award-winning interior designer Cara Siegers formed the trendtalk#7 panel.

trendtalk#7 was entitled “Reflections on the Future” and in keeping with the overall direction, here is a brief report-back on the forward-looking themes that each of the speakers explored:

What Laurence Brick had to say:

With his Loads of Living background, Brick gave a solid and sweeping overview of the major shifts to have affected consumers in the last few years. He highlighted the fact that trends are not static, and instead, they evolve and feed each other. They are a reaction to what is happening and also a response to previous trends. Trends are first visible on social media like Pinterest, Facebook and Twitter.

Brick’s presentation was comprehensive and insightful. Here are a few of the key trends he highlighted: 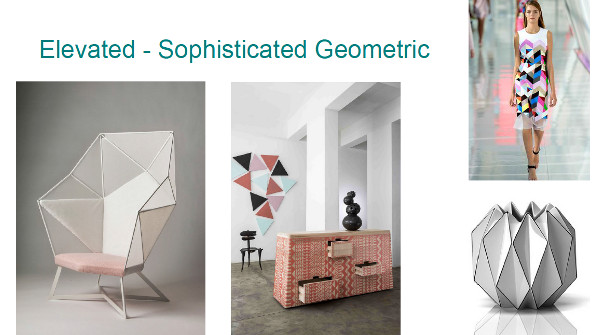 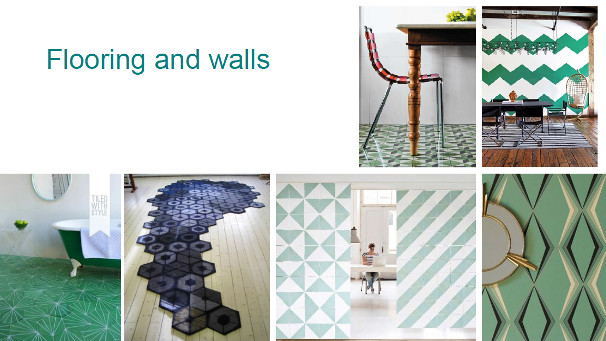 Siegers spoke about two recent trips, one to New York and the other to London for the London Design festival, from her perspective as an award-winning interior designer at Inhouse Brand Architects.

She spoke in detail about the rise of 3D printing and its increasing availability to designers due to more affordable costs. She also touched on: 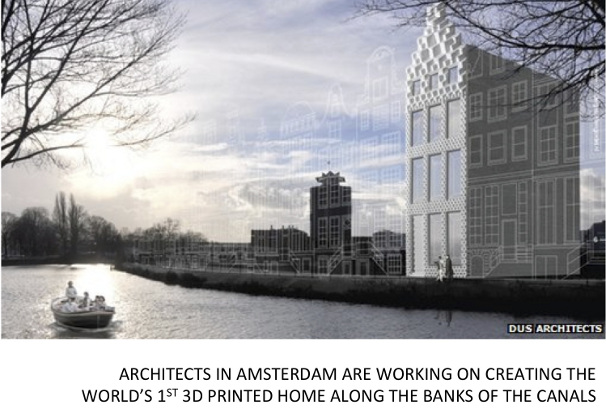 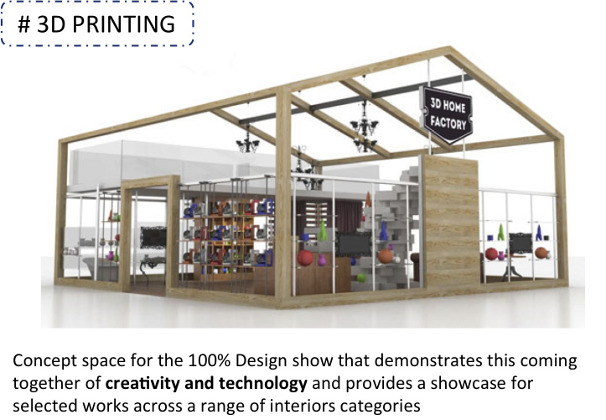 While not wanting to offer a “trend prescription” but rather a dose of “Eye Vitamins”, Burton did identify that the major shift we are facing is a move from the idea of “human nature” towards the concept of “urban nature” now that the majority of the human population lives in cities, versus rural areas.

According to Burton, trends start on the streets and spread virally, often via social media, and come largely from cities. This is because cities offer diversity, proximity, possibility, pace of change, identity and creativity. In particular, Burton expanded on the rise of Pinterest as a popular medium. One of her own boards, A if for Africa, can be found at http://www.pinterest.com/lianneburton/a-is-for-africa/

For her, the widespread prevalence of crystalline and hexagonal forms in fashion and home is somehow linked to our experience of jagged city skylines and urban structures. The work of British sculptor Anthony Gormley is expressive of this now predominantly urban body.

Relating the above global shifts back to her local context, Burton did speak about what it might mean to be both urban and African, citing musician Spoek Mathambo and fine artist Nicholas Hlobo as contemporary proponents of a profound change that is only set to increase. 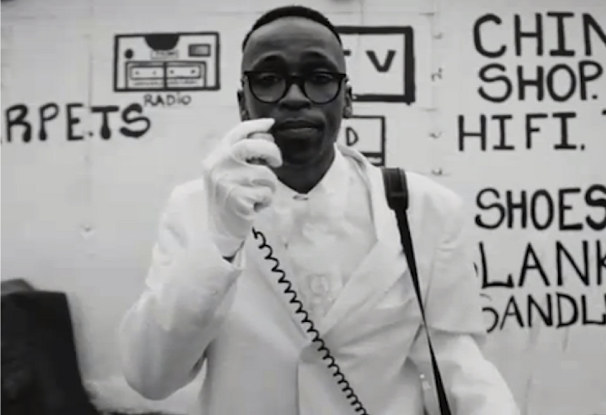 The trendtalk series will continue into 2014 and beyond. trendtalk has formed a new relationship with the South African Institute for Interior Design (IID). Each trendtalk will now earn IID members 2 Continuous Professional Development (CPD) points per session.

Please diarise the following dates for the upcoming trendtalk sessions in 2014:

The trendtalk series is run by Lauren Shantall and is in aid of design-minded charity Rock Girl. All funds raised go towards creating awareness for the need for Safe Spaces for women and young girls and boys. trendtalk#7 raised R1034, and previous donations from trendtalk#6 were used to fund a leadership camp for young people from Mannenberg.

The event included a pendant fitting giveaway from local designers Our Awesome Work and complimentary refreshments from Sir Juice and Groote Post.

trendtalk#7: Reflections on the Future 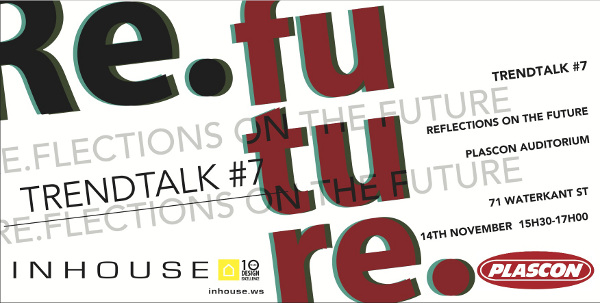 trendtalk#7 took place on 14 November from 15h30 to 17h00 and the speakers included Laurence Brick, Lianne Burton and Cara Siegers. 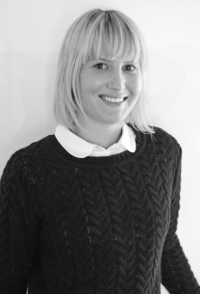 Cara Siegers has a Bachelor of Business Science Degree in Marketing (UCT) with honours and graduated on the Dean’s Merit List. She then completed an interior architecture diploma at Design Time, School of Interior Design, graduating top of her class with a higher diploma. Cara is currently a Team Leader at Inhouse Brand Architects where she focuses on branded design solutions within the hospitality industry and has been involved in several award-winning projects for clients such as Windhoek. Her design for the Orphanage Bar in Bree Street was named as one of the Best New Bars in 20 Cities by Conde Nast Traveller. 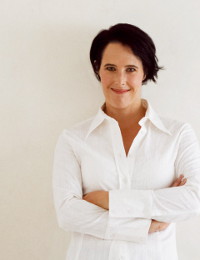 Previously launch-editor of Elle Decoration and editor of House and Leisure magazines, Lianne Burton now works as a communications consultant specialising in content development. She’s an enthusiastic and respected proponent of the creative industries, with a long-standing passion for art and design. Lianne headed up communications for Cape Town’s successful World Design Capital 2014 bid, on behalf of the Cape Town Partnership, and is the facilitator of the Cape Town Design Network’s ‘Design Dialogues’ events. Although still an avid fan of magazines, and sometime contributor to them, she favours the dynamism of digital and social media content. Her astute editor’s eye and ability to intuit trends are most evident on Pinterest. Preferring not to be pigeonholed, Lianne describes herself as an ‘accidental curator’ …of words, images and ideas. 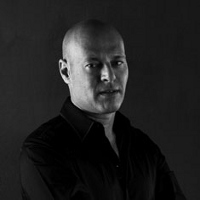 Laurence Brick is one of the founders of homeware retail outlet Loads of Living. While still a member of the board for Loads of Living, he went on to launch Platform Creative Agency, a unique design consultancy specialising in creative design direction for exhibition, hotel, residential, corporate, retail and product design projects, where his clients include Decorex. He is now launching 100% Design South Africa, which will have its inaugural event in 2014, as an official part of the WDC2014 calendar.

There will be a lucky draw for five Pencil Shaving Lamp Shades by Our Awesome Work. We will be giving away this pendant fitting in one of each of the following colours: lilac, red, blue, yellow and green. The prize includes an energy-saving bulb.

Guests are asked to please arrive early to secure a seat, as we regret there is no advance booking. trendtalk#7 is open to all interested parties. 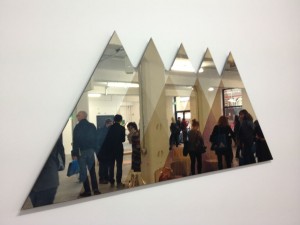 If you’d like to receive regular news about upcoming trendtalk sessions, please sign up for our newsletter using the form at the top right of this page.

Warning: Parameter 1 to W3_Plugin_TotalCache::ob_callback() expected to be a reference, value given in /home/trendwxj/public_html/wp-includes/functions.php on line 3385